Christopher A. Cruz Joins PIDB as President and CEO City of Hagatna, Island of Guam 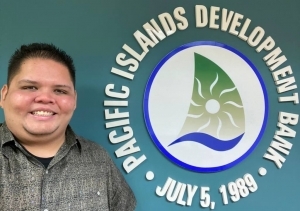 Christopher A. Cruz Joins PIDB as President and CEO City of Hagatna, Island of Guam, December 16, 2019

Pacific Islands Development Bank (PIDB) is proud to announce and welcome Christopher A. Cruz as the bank’s new president and chief executive officer. In that capacity, Mr. Cruz will be responsible for the overall operations of the bank. Specific duties and responsibilities include executing goals and objectives under the strategic plan with the approval of the Board of Directors, implementing and enforcing all bank policies, procedures and regulations, ensuring key bank functions are performed in a satisfactory manner, recruiting and hiring of qualified persons to the bank’s professional staff, organizing and facilitating Board of Directors and Board of Governors meetings, and performing key functions as customary for a chief executive officer of a financial institution.

“On behalf of the management and staff, we congratulate and welcome Mr. Cruz to our PIDB family,” said Rosa Weilbacher, Manager of Administration. “He brings with him tremendous banking knowledge, experience, management skills, and development financing to the bank”, she added.

In accepting the position, Mr. Cruz said, “I am excited to take on this new challenge and look forward to working with the PIDB Board of Governors, Board of Directors, and the staff and management in boosting economic activities throughout the Micronesia region.” PIDB’s mission and purpose is to “contribute to the acceleration of the process of economic and social development of the member states and nations, individually and
collectively, and to promote economic cooperation among them.” The
current shareholders and members of PIDB are Guam, the Commonwealth
of the Northern Mariana Islands, Republic of the Marshall Islands, Republic of Palau, and all four FSM states of Chuuk, Kosrae, Pohnpei, and Yap.

Mr. Cruz received several accolades during his career with Bank of Guam
as Bank Guam Branch Manager of the Year in 2014, Bank of Guam Branch
of the Year (Pohnpei Branch) also in 2014 and Small Business
Administration Banker of the Year in 2017. Mr. Cruz also contributes to the community by serving in numerous organizations such as the Rotary EClub of Pago Bay Guam and the parish council of Our Lady of Peace and
Safe Journey Catholic Church in Chalan Pago, Guam.

He is married to Ana-Alicia C. Cruz and together have two beautiful
children, Ariana Michaela and Christopher II.

RSS feed for this section